The Whitehorse Hill Cist and death on the moor! 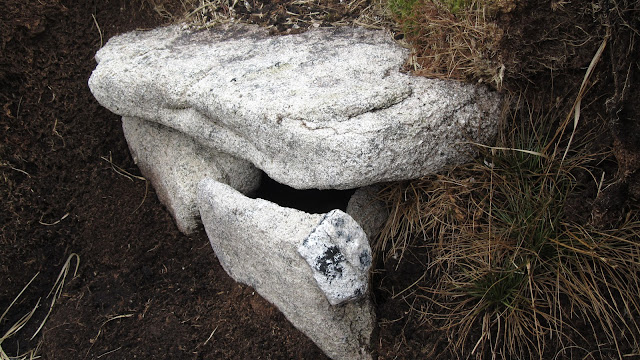 Now, the other day I came across a highly entertaining blog called “Two Blondes Walking” and one particular post mentioned a book called Dartmoor 365, by John Howard.


Remembering I had a copy on my shelf, I took it down and started browsing. 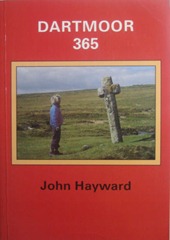 The book is quite unique and adds to the fun of discovering the moors; The area of Dartmoor is 365 square miles, and the author cleverly manages to find something interesting to find within each square mile. Some of these are difficult to find, some rely heavily on a bit of good fortune, whilst some are obvious and if you miss them you should not really be allowed out on your own, let alone go traipsing across the moors.
Almost at once, I was inspired to use it to plan a route for the weekend.

Question was; where do I start from? Well, in another post,  the Two Blondes mentioned they had some difficulty finding a monument to some fellow called William Donaghy, thanks to overgrown gorse bushes, and they came away empty handed. That got me to thinking it was worth a crack at finding it.
I had set out a route to take; one that would tick off a few squares whilst at the same time, allow me to have a nose at the latest archaeological find on Whitehorse Hill.
What I needed to make this little treasure hunt successful was some clement weather. When I pulled up at Postbridge, after a mandatory breakfast at The Fox Tor Cafe, it was cold, but dry and signs were promising.

I took a familiar route up over Broad Down, and down to the East Dart Waterfall; my first square ticked off on the walk. 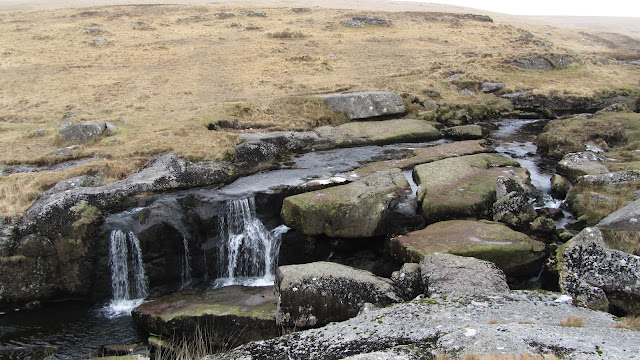 I crossed the falls easily, and started up onto Winney's Down, where I expected the terrain to get tougher. What soon became apparent was the firmness of the ground underfoot; the land was frozen. As I traipsed over bogs of sphagnum that would usually have me sinking up to my knees, my confidence grew with each footfall, and it made for easy walking. 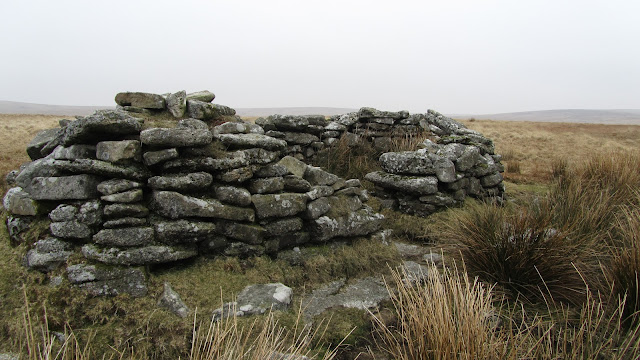 I found my second square; Statt's House and took a break. I went inside and huddled around the fireplace warming my hands.. 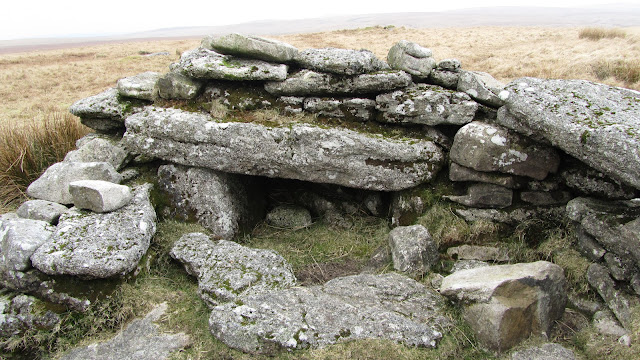 ..Well, I can dream! Built a couple of hundred years ago, by Peat Cutters, it is a remote spot and testament to the hardy souls that stayed here for days on end to carry out their work.

It was little effort to Quintins Man; a large hollowed out cairn which proves a good place to get out of the wind when the weather is playing up. 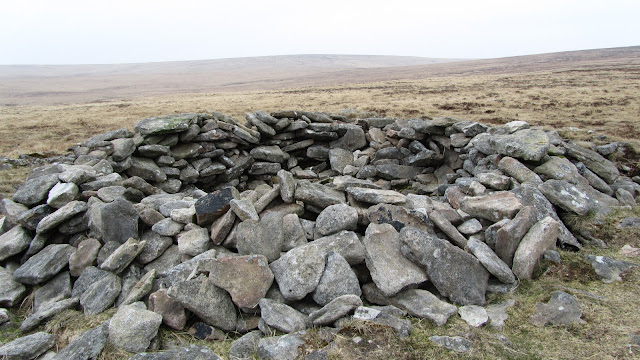 I could have followed the path directly up to Whitehorse Hill, but I veered left to find an old peat pass; designed to allow hunting and cattlemen safer passage through the quagmire, and a stone that is a memorial to its creator, Frank Phillpotts. 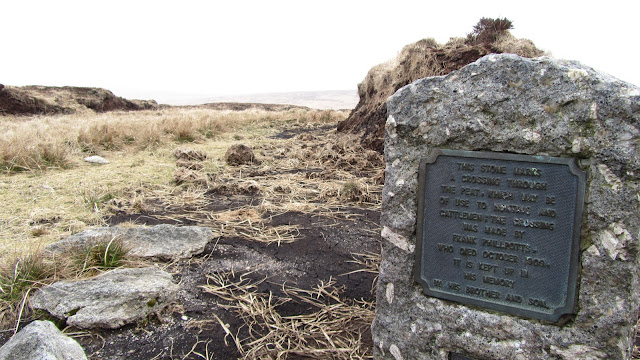 Next up, was Whitehorse Hill. Recently, in the news because of the significant archaeological find made here, I was hopeful I could find the cist that was making the headlines. It was surprisingly straightforward to locate! 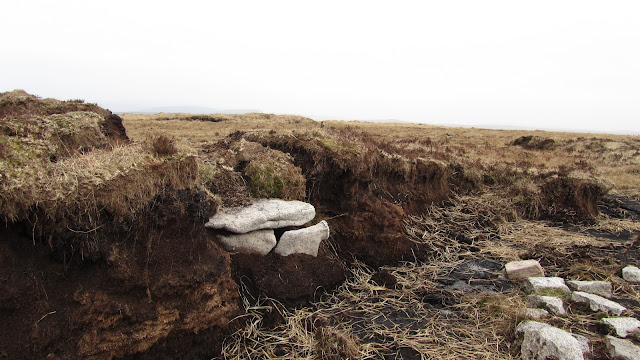 In August 2011, the peat fell away from one of the mounds sat on top of Whitehorse Hill, exposing a previously unknown burial cist. Usually, thanks to the acidity in the soil, little is found, but this was intact and certain small items were still within it; such as leather and textile articles, and cremated human bone. For the latest on the find, go to the Dartmoor National Park website.

Onwards, to Hangingstone Hill, and thanks to the frozen bog, there was no need to take the peat pass; instead it was “as the crow flies”. 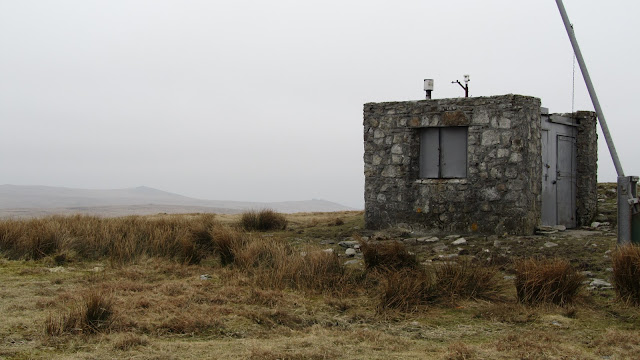 To the north lay Steeperton Tor, but this was the furthest north I was to go. It was time to turn East to Watern Tor, before heading for the car. 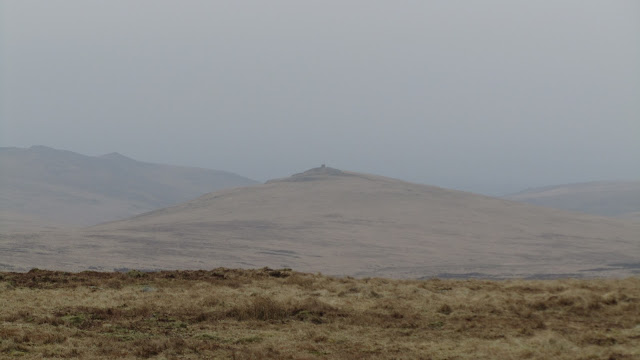 I intended to head straight for Watern Tor, given the good ground I had experienced today, but the terrain changed with thick grass and I was moving into ankle turning territory. I took a look the valley below; Watern Combe, and from my elevated height, I could see it would be a tricky traverse, so I contoured the hill to miss the worst.

Over the river, I was up to the tor for a short break. 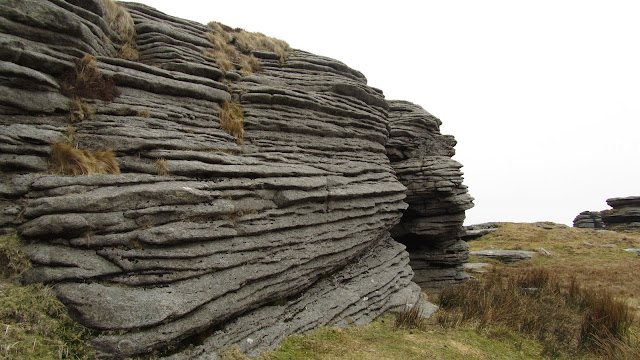 My next square was achieved with a look at The Thirlstone. This is the name for the gap between the two granite outcrops, pictured below. 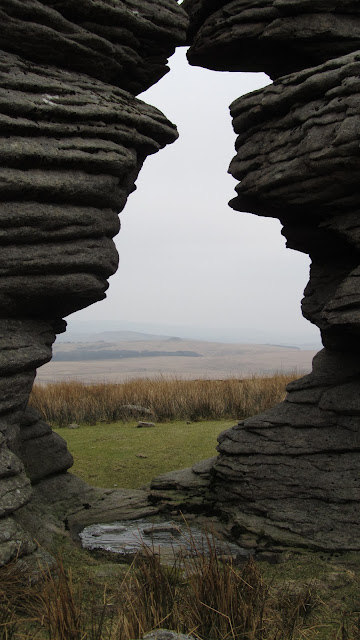 I was finally heading home, but there were a couple more squares to bag first. The dead sheep I found wasn’t one of them. 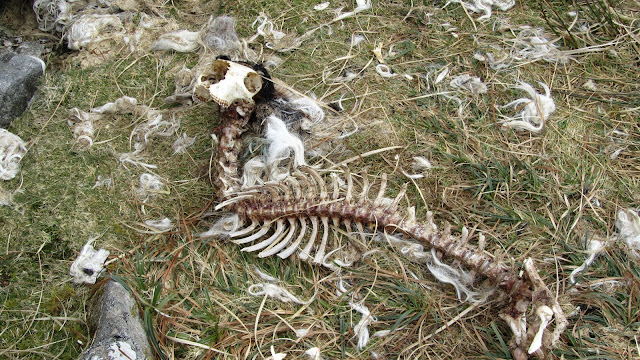 The plan was to hand rail a wall to a ladder stile, on Manga Hill, hop over that, then follow a boundary work down to Teignhead Farm. Easy! 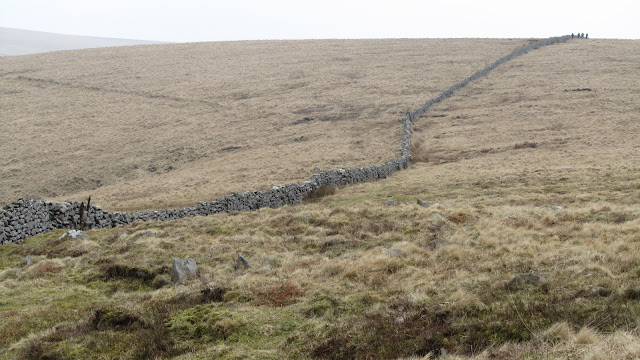 I thought about Manga Rock beneath me, but decided against bagging it, and moved on to the derelict farm where I could tick off another square, one that possessed the nearby clapper bridge that spans the North Teign River. 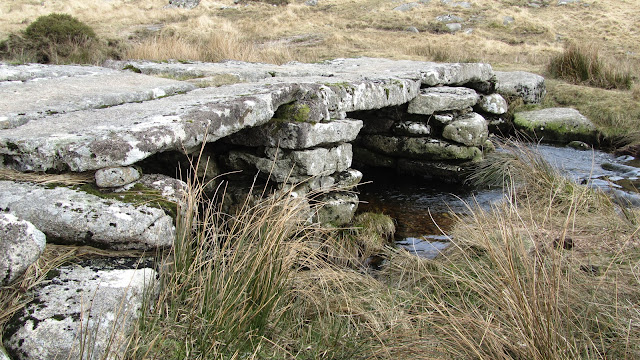 Across the river, it was a gradual ascent, up along a wide dark bridleway, to my next, the Grey Wethers Stone Circles. Although restored in 1909, they are estimated at being 4000 years old. 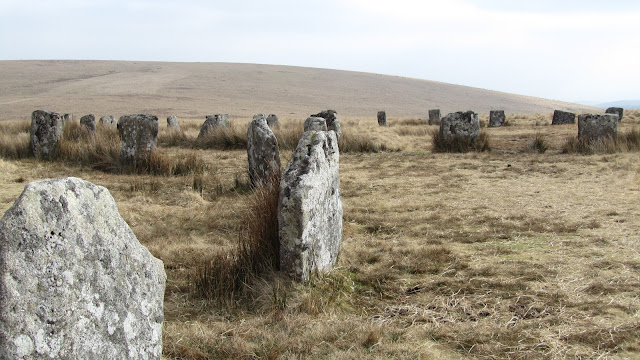 The sun had appeared and with it, a thaw. Thankfully, I was passed the deep stuff, and had only paths left to negotiate. By now I was walking above the East Dart River. I looked back at the vista, now bathed in hazy sunshine. 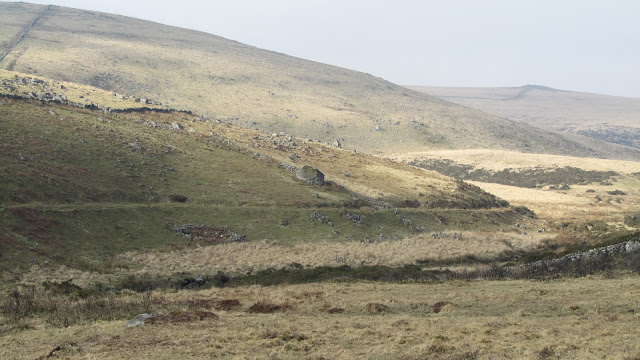 On a bit further, I spotted another square prize within my grasp. The sheepfold was a bit off the track, and having done about ten miles, I had no real compulsion to wander over to it, but I’m going to claim it as I could see it and I was in the square mile it resides in! 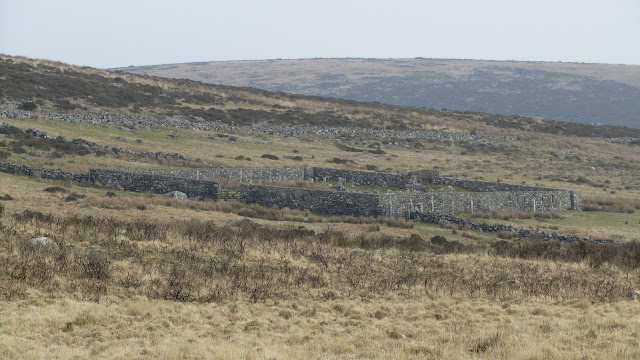 Besides, I had another trophy on my mind. I was nearing Hartland Tor, and my attention had turned to locating the memorial stone for the aforementioned William Donaghy (remember him?).

“Who?” I hear you cry; well Dartmoor has many mysteries, and the tale of William is one of them. But before I tell it, I had to find the stone. I didn’t have the book with me, so had to remember the drawn picture. As I walked along the river path, I kept looking back to get the right angle, with the two trees, and I thought I had finally found it below; 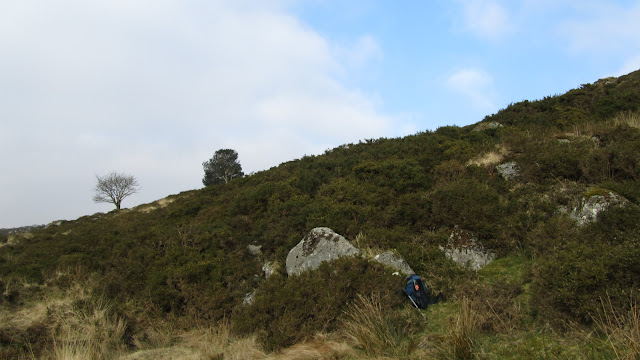 The heavily gorse bushed bank made it tricky to see any significant stone. I made one attempt up a dubious route, but was thwarted by the uneven ground. I returned to the path, and took off my rucksack, put my camera in my pocket, and had another bash at it. It’s hardly a path, a bit of a scramble through heavy vegetation and between prickly bushes, but you soon reach a sizeable rock, and there was the memorial engraved on the lower section! 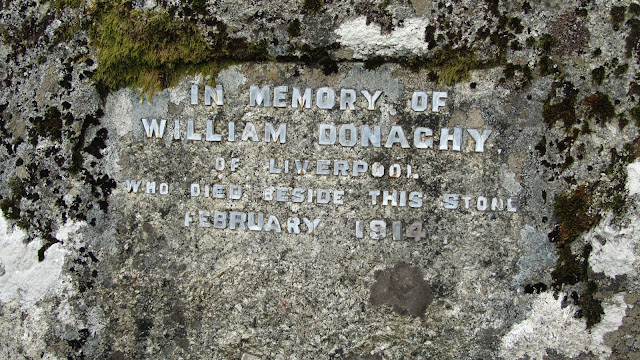 Now to the mystery;

In November 1913, William Donaghy, a teacher, left his school in Warrington, and went missing. Three months later, a farmer discovered his body beside this stone beneath Hartland Tor. He had died of exposure due to the extreme cold the area had experienced. Upon his persons, they found a guide book (suggesting he was doing a traverse of the moor), twenty pounds in gold coins, and a cloakroom ticket from an Exeter railway station. When police redeemed the ticket, they found a revolver and ammunition amongst his belongings. There has never been an explanation as to why he left home.

I did a bit of Googling and discovered, thanks to the Yelverton & District Local History Society that when he was found, he was wearing a black and white spotted tie and a Swiss wrist watch. Nothing odd about that, granted, but fast forward twenty years,  and the body of Walton Howard was found near Rowter Marsh, on Dartmoor, and this person was wearing the same watch and tie. It turned out that he had also been a teacher at the school in Warrington!

Add to that, some time later, at Beachy Head, in Sussex, a man named George Miller was found at the foot of the cliffs wearing, you guessed it, the same watch and tie! He had also been at the school in Warrington!

The connection is still a puzzle and I doubt we will ever know the truth.

Back to the walk; I scrambled down from the stone, pretty pleased with this catch, and left the scene with a bit of a spring in the step.

The path continues near to the edge of the East Dart and becomes a bit “sticky” in places; I had done so well, for the past six hours, to keep my gaiters clean, but eventually my right leg disappeared into a puddle of peat. A higher route appears through the gorse and I chose that. It all gets a bit painful brushing through the bushes, but I was pleased to be walking it now and not when in full bloom when it is no doubt impassable, forcing you back down to the river.

Eventually, through a couple of gates, the path widens into a field and the going firms up again. 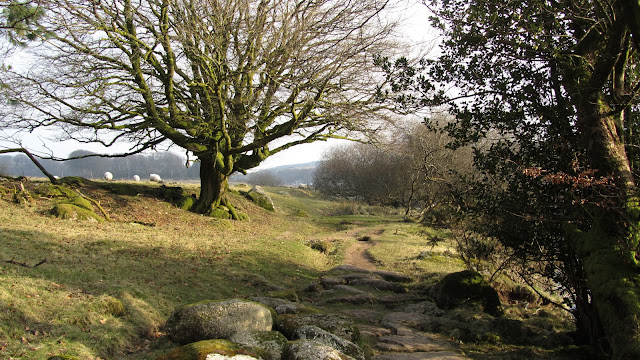 In about ten minutes, I was back at Postbridge, with its pretty arch road bridge, and the famous clapper bridge a stone’s throw further downstream. 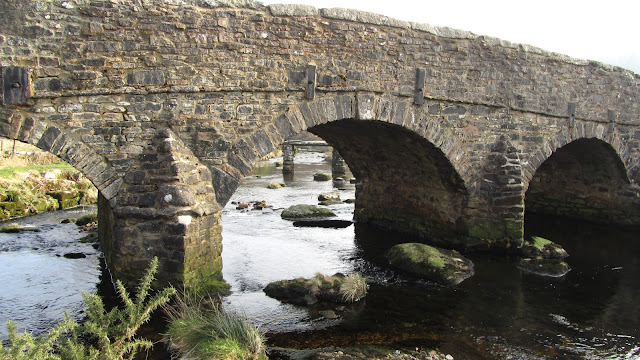 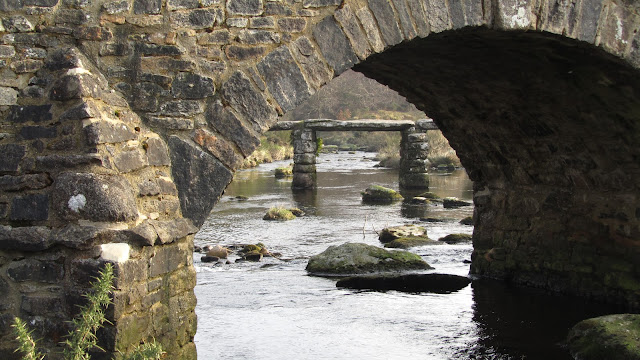 A short stroll up to the car park and the day was done. Thoroughly enjoyed this one, helped by the frozen ground early doors, and the fact that the last time I had been to Dartmoor I weighed 20lbs more!
at March 04, 2013