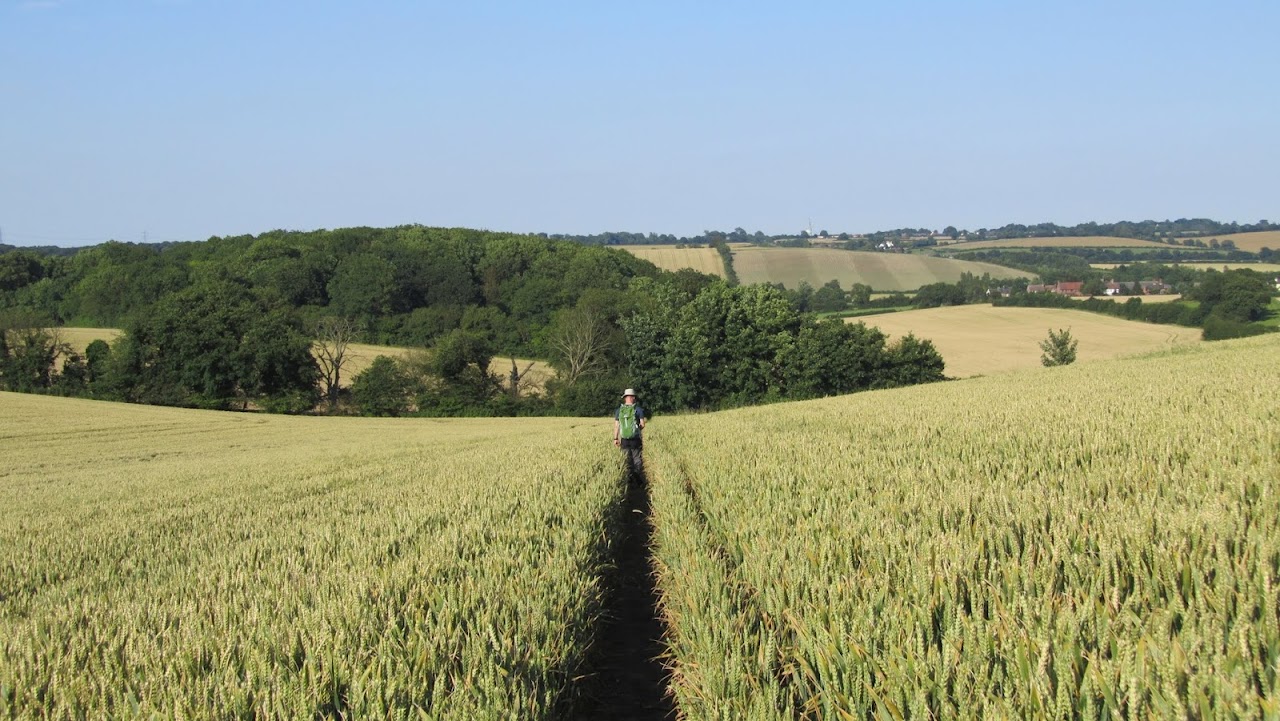 I calculate that I have just 62 kilometres to my chosen finish line of Hemel Hempstead, which leaves me with two long, or three short, legs. This leg has been a long time avoided; The low pressure that had sat over the country this summer has been a pretty poor excuse to delay it, but it had made it more difficult to bite the bullet and tick off what I was expecting to be a poor day out.

It finally took the offer of a second car, to eradicate the hours that would be spent on public transport, to get me back onto the trail. So, Sunday, Jim and i drove off to Lilley, dropped one car off, then made our way through Luton, to Chalk Hill, where I left the Chiltern Way all those many weeks ago!

In my new gear quest; looking for some lighter footwear, I was also trying out some new boots; the Meindl Respond Mid XCR. These, I hope, could be the possible footwear of choice for the Bibbulmun in 2013; no time like the present to see if this boot was up to the task.

And so it was, when we had finally dealt with the “travelling to” bit, we set off rather late at about 11.30am, into the midday heat like mad dogs. Straight away, we were faced with overgrown footpaths; whilst a lot of it was due to the flora going crazy at the first real bit of sunshine in months after the wettest summer on record, sadly, much of the problem was down to neglect of the path. It was obviously not a part of the Chiltern Way that gets trodden often.

You see, this is the thing about this leg. I certainly didn’t view it as being a part of the Chilterns, yet if you look at the official website, there is quite clearly an area to the north of Luton that falls into the boundary of the Chiltern AONB (Area of Outstanding Natural Beauty). However, it is cut off from the larger portion to the south-west, and when you leave the wonderful chalk downs of Dunstable, it involves a traverse that will never be classed as outstanding or natural, let alone beautiful!
Suffice to say, we marvelled at the fenced off path at Chalton…. 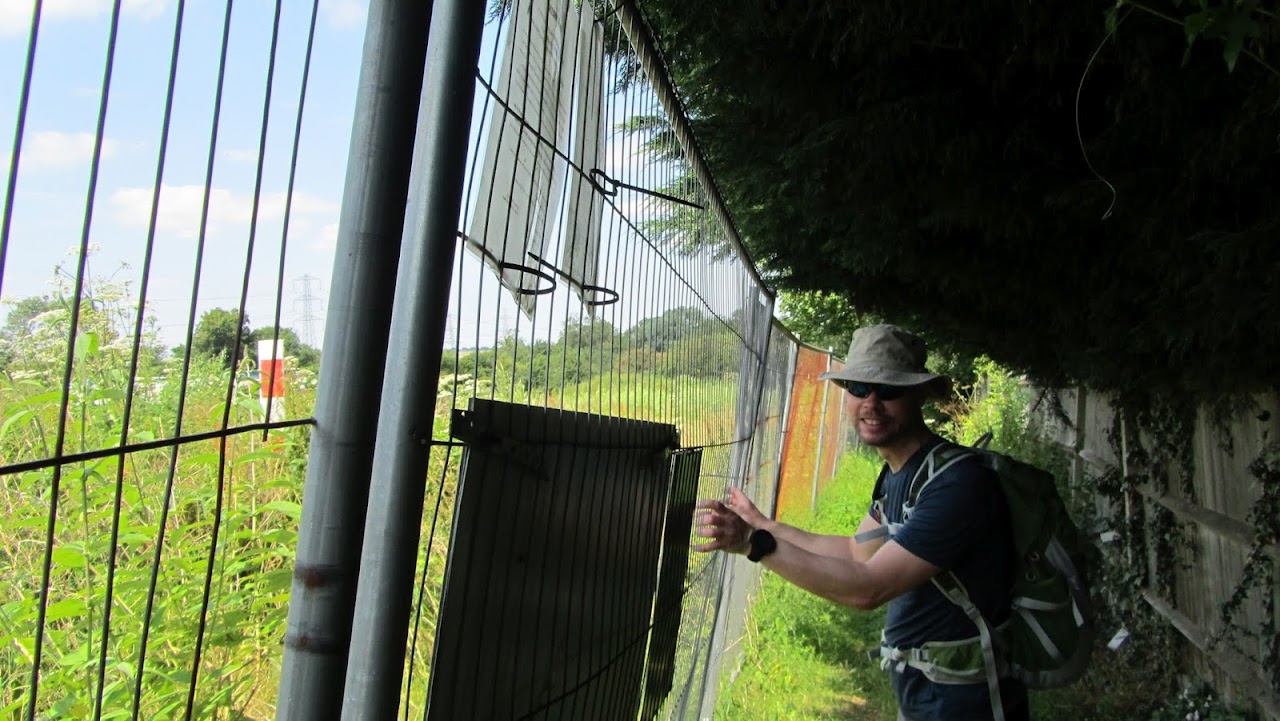 … and we were captivated by the M1 motorway…. 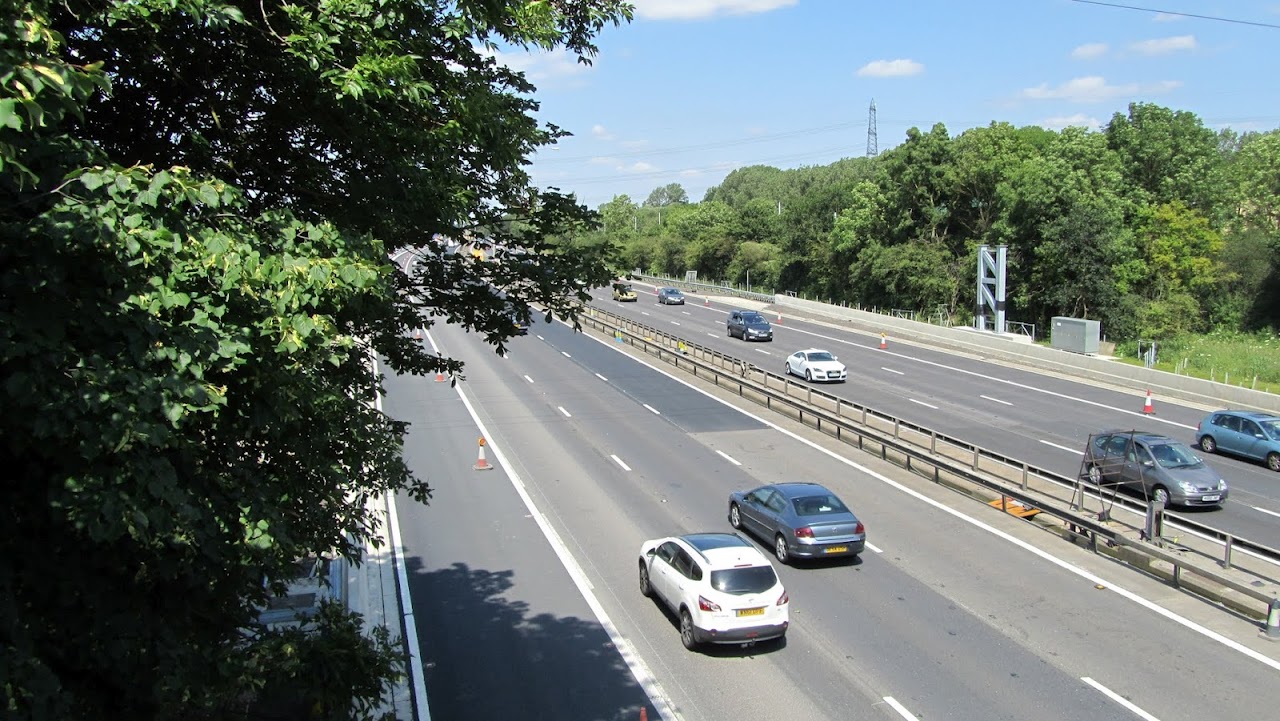 … and we stood in awe at the railway bridge they built just for us walkers! 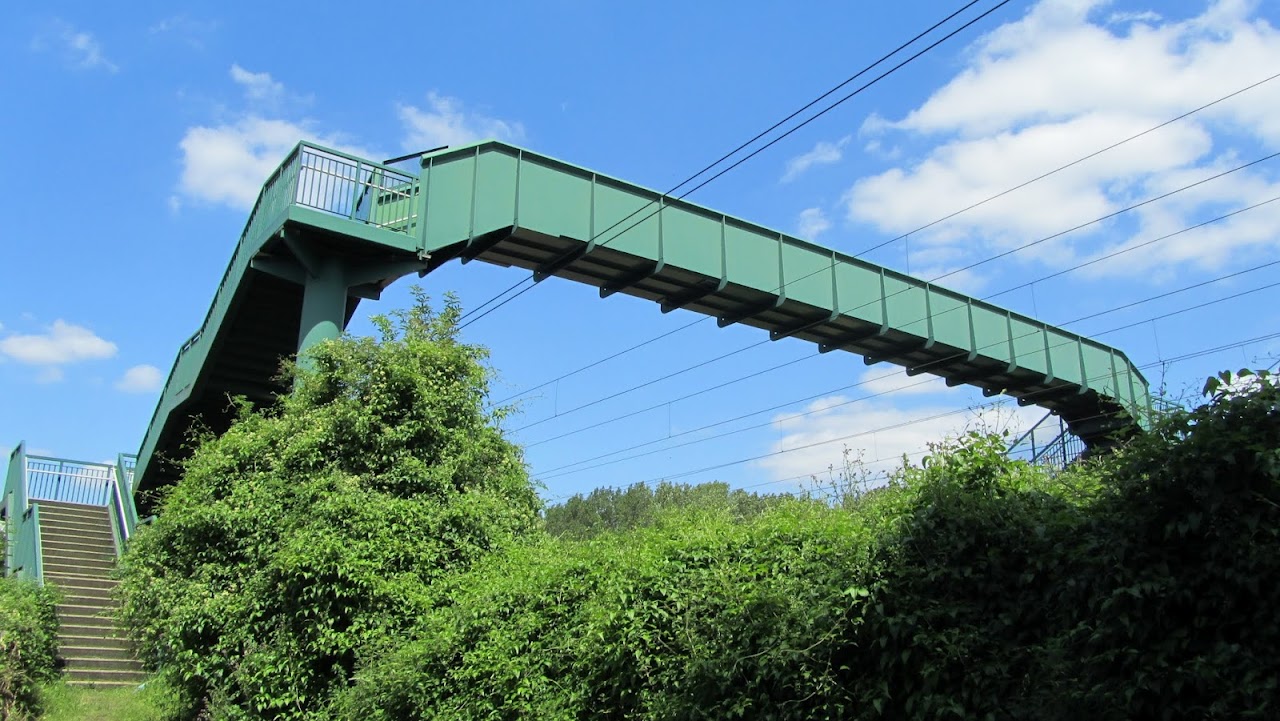 Eventually we reached something of more merit, and more deserving of our efforts in the increasingly warming sun. We stopped for lunch before we reached Upper Sundon. Good job too, because the pub in the village looked too inviting!

Once we had eventually worked out where the trail was going (they don’t make it easy all the way through this “non-Chiltern” section), we climbed up into the Sundon Hills Country Park, where we could see the reason the trail went this far north.

Sharpenhoe Clappers, is an impressive hill covered in beech woodland, with steep contours on three sides. The woodland hides the remains of medieval, Roman and Iron Age archaeology, and is worth a look if you are in the vicinity.

We took a wrong turn here and found ourselves heading downhill. When we met up with a part of the Chiltern Way we should clearly be meeting later, I turned back to retrace my steps. Jim wasn’t keen, but I had done the rest of the walk and I wasn’t going to take a short cut now! It didn’t take me long to reach the correct path and make my way to the northern slope of the hill, where there was a decent view of the village of Sharpenhoe. 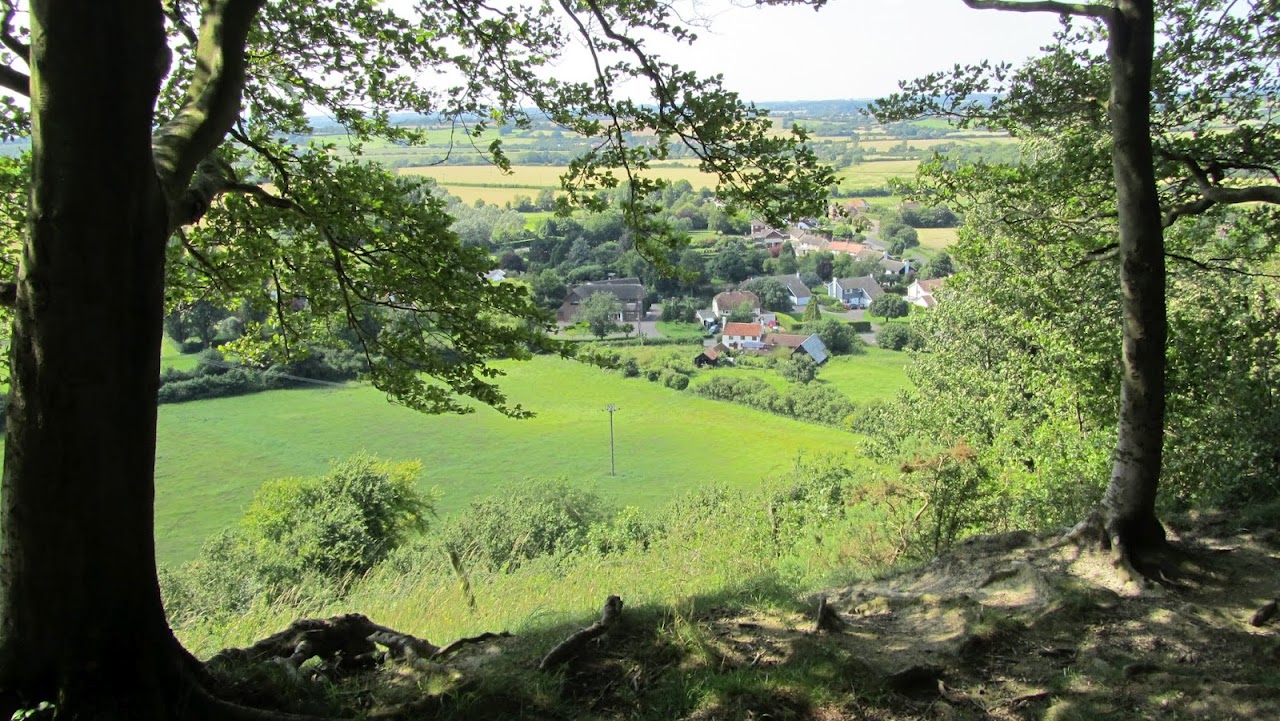 Taking care not to take the Northern Extension route, I continued on. I was back with Jim in about ten minutes and we were now heading in the right direction; that is, to the car! The route wound its way through Streatley, where we stopped for a breather in the shade, by the village duck pond. It really was warm now, a little oppressive, and with seven weeks of inactivity, I was finding it tough. Where’s the bloody rain when you need it?

We had one last set of hills to tackle; Galley and Warden Hill, where you get a good view of the town of Luton, should that be your thing! 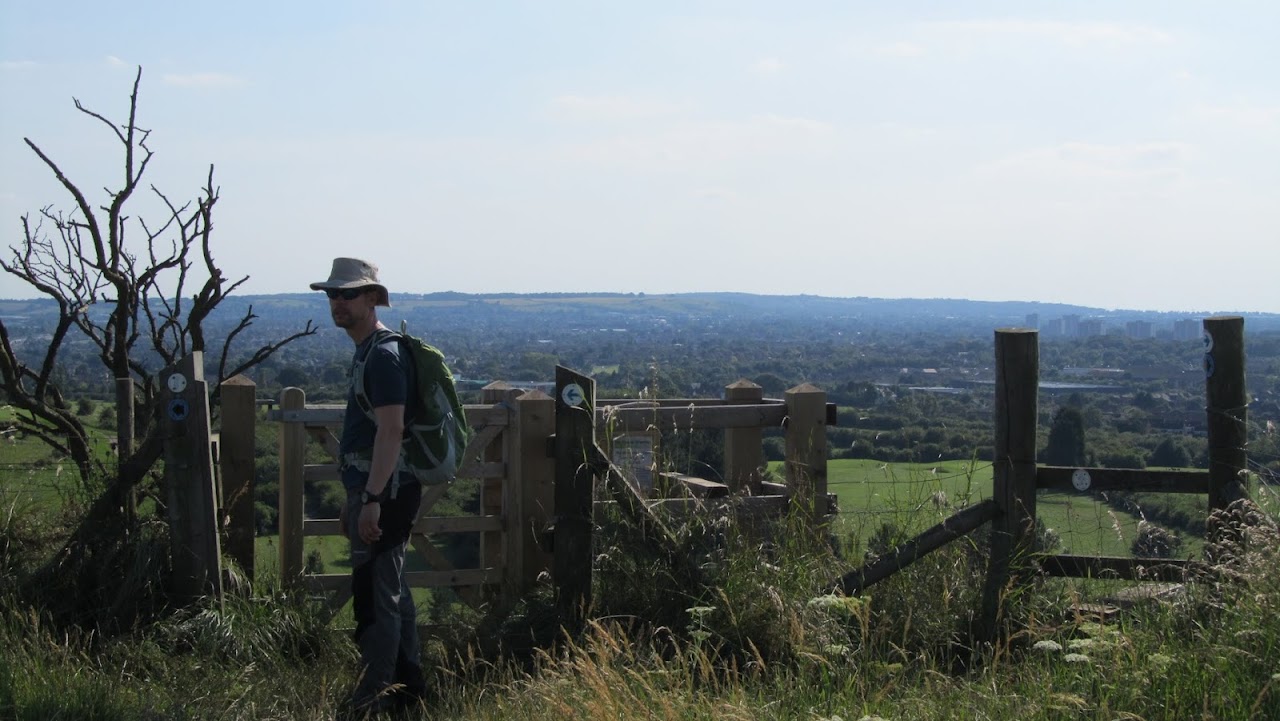 Off the hills, we made our way passed Whitehill Farm, where I was now starting to feel a headache come on, due to the heat. I had had a couple of litres of water, so I wouldn’t put it down to dehydration, more overexertion after such a long time without significant exercise. We soldiered on through our final field of wheat, skirting the boundaries of Lilley Wood, finally arriving at the village.

Boy, was I glad that day was over! It had it’s moments, but it is definitely not my favourite part of the way.

Next up, another stint outside the AONB, before hitting some familiar ancestral ground, at the village of Flamstead. Whether it will be one leg of 35 kilometres to the finish, will depend entirely on how much walking I get in before I tackle it, though!

As for the boots; very impressed on this first outing! The rest of my body ached, and had had enough, but the feet could easily have continued on! I found the ankle support to be excellent, and I wasn’t too bothered by the thinner sole meaning I felt the ground more than usual. Despite them being Goretex lined, my feet didn’t suffer or overheat, either; unlike the rest of me!
Email Post
Labels: chilterns the chiltern way