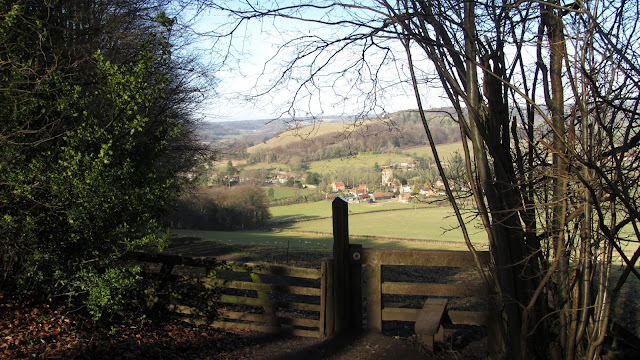 Last Sunday, it was Leg 4 of the Chiltern Way, and I am worried that the day may be a tough one to match, let alone surpass! The scenery is probably the best you'll see in the Chilterns, in one single day. l loved it!


The weather was great; It was sunny and warm… so warm I could have done with that gentle breeze from Hushabye Mountain!

I parked up at Skirmett, where I had left the trail a few weeks back, and set off at a pretty stiff pace, which soon faltered at the first hill. Up through Adam’s Wood, across the bare hilltop and down into Fingest Wood, where you get your first view of the village with the same name.

I stopped to try and capture the scene in all its panoramic glory, before following the path down. Fingest is a small village that has its charms, and is worth a stop before hurrying through to its more famous neighbour. Of particular interest is St. Bartholomew's church, with it’s Norman tower. 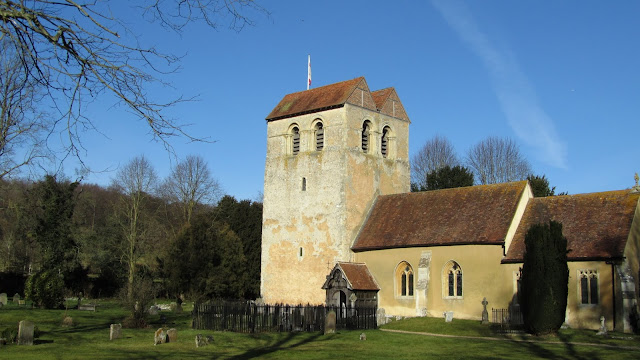 Out of the village, you are soon skirting Turville Hill, with that familiar windmill perched on its peak. This is also a popular spot for Red Kites to ride the thermals, and they were out in abundance today! 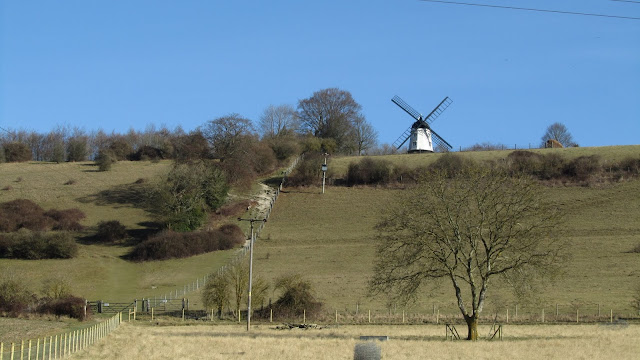 When you walk into the village of Turville, you should recognise it. You may know it as Dibley and pop into the church to see if Geraldine is still the vicar; you may look up at the windmill and scan the skies for Baron Bomburst’s zeppelin; you may even seek refuge in the Bull and Butcher pub to escape the triffids (good enough excuse for a pint, I say!). 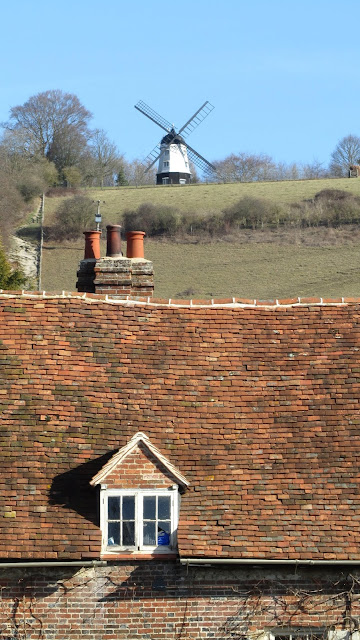 These are just a few of the things filmed here; when a director needs the chocolate box image of an English village, Turville is the first point of call. It was early, and too soon to stop, so I made my exit, passed the church and out into open field. I can’t help but keep glancing back, though, at the windmill on the hilltop. The scene evokes memories of my childhood, which is weird because I don’t think my childhood was spent living in a windmill and having adventures in a magical flying car!

With the scene now out of sight, I am climbing again, and actually blowing a bit by the time I reach the top, before a steady walk into Southend.

Across the road, and into Balham’s Wood, which brings you onto the Stonor Estate. I have tramped through parts of this huge estate for over a decade, and I have to admit I have never actually seen the house… until today. It is impressive, the valley it is nestled in adds to the grandeur. 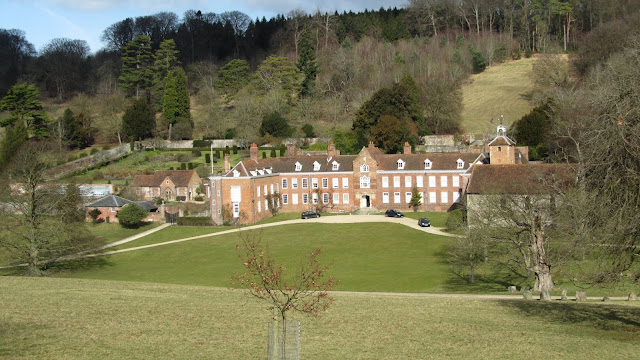 The origins of this great building date back to c.1190, making it one of England’s oldest manor houses. It can be visited at certain times of the year;  Go to The Stonor Estate Website to find out more. The public footpath skirts the house from a respectable distance; it is nicely elevated, giving you stunning views. 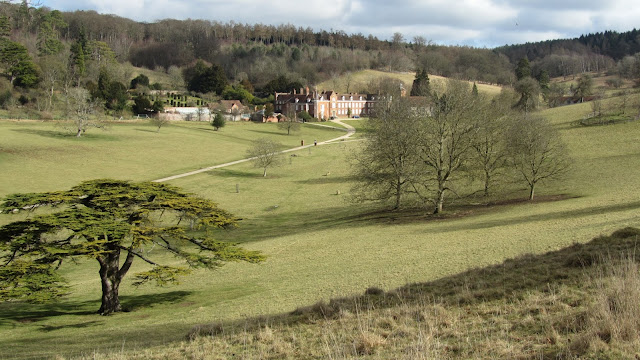 A short distance on the road through Stonor, then off west through Park Wood to Lodge Farm, a place I recognised from many walks along the Oxfordshire Way, where both the trails intersect. Passing Maidensgrove, the trail barely touches its boundary, you walk out into a large expanse known as Russell’s Water Common. Nearly at the turning point, and lunch,I thought, but no, the way soon veers left, and descends steeply to a confusing junction of five rights of way. 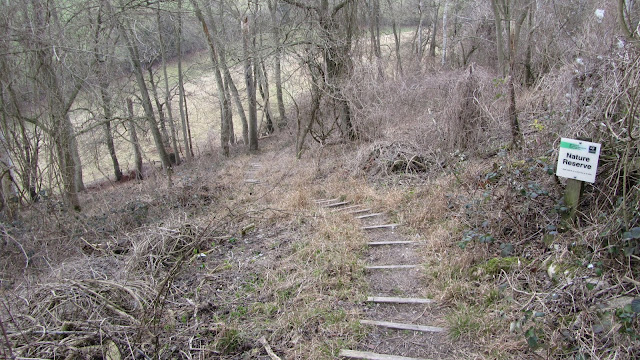 I ignored the signs showing the Chiltern Way going off in a south-westerly, it didn’t match the map. I assumed that there may have been a reroute of the trail since the map was printed. I would need to investigate this conundrum when I was home, though, because right now, I knew I wanted to take the north bridleway towards Russell’s Water, as my time on the way was finished for the day.

The bridleway continued along the base of Little Cookley Hill, a constant reminder that at some stage I was going to have to be heading up it again. Sure enough, I turned right to join another part of the way, the end of a loop that will be my section five, next weekend.

Turning left at the road in the village, you soon see the famous duck pond. I stopped here for lunch taking a seat on the grass, as the bench was, predictably, already taken. 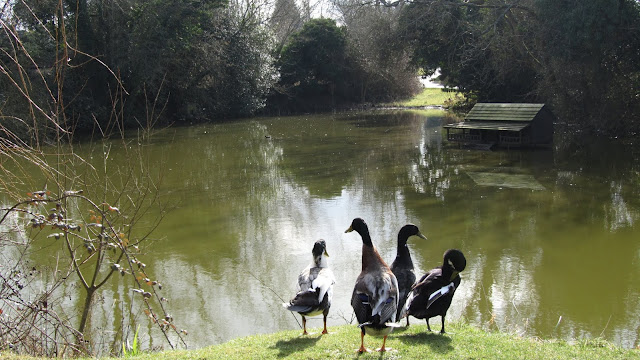 So why is this duck pond famous? A long time ago, this idyllic little piece of England earned a reputation as a bit of a black spot. I know of at least three occasions when a local beauty, Miss Scrumptious, narrowly avoided serious injury and put her car in the village pond. It’s a changed scene since the film was made, trees and bushes have grown, but you still get a rough idea of where she went in.

A short break basking in the sun, I had to accept that Truly wasn’t going to show, so I started for home. I crossed the common, and through more woodland, down to Pishill, a small hamlet with a 15th Century Coaching Inn and a church, whose origins go back to the Normans. 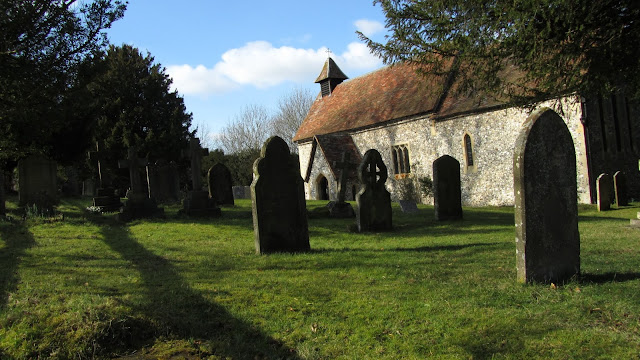 Out of the hamlet, the route then took me through open field. Had I walked across here a few weeks ago I would have been labouring in a quagmire, but not today, the ground was dry, and it was pretty easy going for a ploughed field. 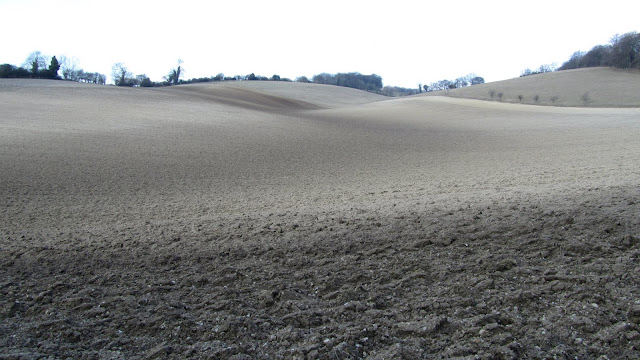 Over Hollandridge Lane, another familiar right of way, to me, that takes you to Christmas Common, I was fast realising that this route was probably one of the best you could do in the Chilterns. Up and down rolling fields, the ascent was adding up. 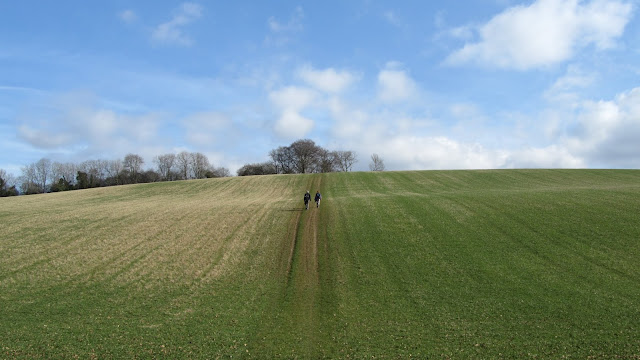 I eventually reached Turville Heath, and a short stretch of road walking, but still pleasant for its lack of vehicles. At Turville Court, the road ends and gives way to field once more, and first signs that the end is near when the windmill appears again. I stopped at a bench to finish my coffee and take in the views of this perfect piece of rural England. 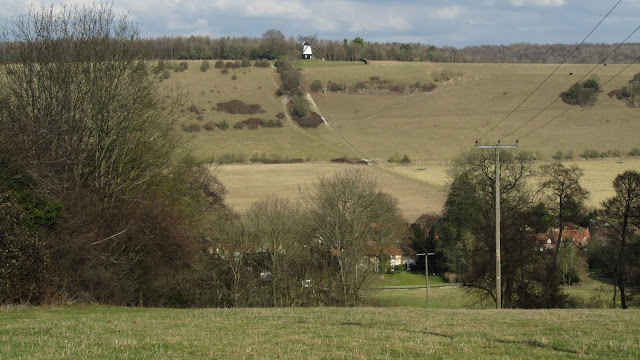 I could have wandered into Turville for a visit to the Bull and Butcher, but no doubt the freakish weather would have attracted the punters, and it would be heaving. Instead, I crossed the Chiltern Way and descended to the road at the foot of Poynatt’s Wood. One more hill, and on the other side, lay Skirmett.

All in all, a pretty successful day! A respectable ascent, reasonable distance, consistent views, and interesting points of interest for Chitty Chitty fans like me! I’ll definitely be doing this little route again, when the season changes.