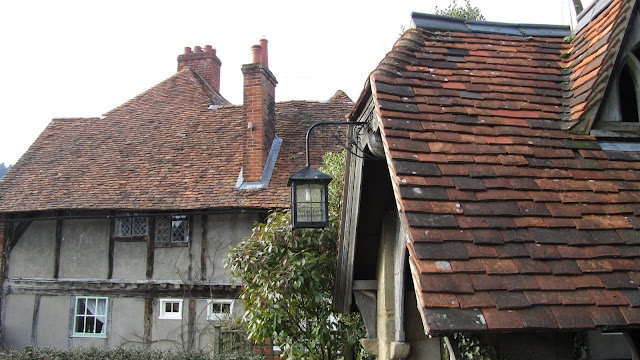 At last, winter was going to show up! We were promised a colder day, with snow forecast for later, but I was confident we would complete the third leg of the Chiltern Way before it arrived. I say “We”; Jim and Diane joined me for this leg, a circular of over 25km, with fourteen of it along the Chiltern Way.


We parked up round the corner from the Three Horseshoes in Marlow Bottom, and were on our way by 9.30am. I was mightily relieved for the ground to be firm underfoot this weekend, and with clear blue skies, it was a perfect day for a ramble.

The first hour consisted of passing through the back alleys of Marlow Bottom, with the odd glimpse of Marlow to the south, before arriving at Bovingdon Green.

In Davenport Wood, the path joins the Shakespeare’s Way for a short while; probably one of the more ridiculous of long distance trails in the country,it is an imaginary route, of 146 miles, that old Bill took “betwixt” the Globe Theatre and Stratford Upon Avon. I can’t say it would have been the route I would have took, if I was him!

We passed a noticeboard detailing the extensive world war trenches in the region, but we were heading west, and they were south, so we agreed to save exploring them for another day. We descended into an open valley, continuing to a road where we stopped on a handily located bail of hay for a break and a hot drink. From one woodland to another, this time Homefield, we followed a wide forestry commission track. A kilometre on, we almost double backed on ourselves, climbing steadily up out of the wood, through open field, to Rotten Row. It was then just a short descent through more woodland to the outskirts of Hambleden.

Good job I hadn’t suggested a spot of lunch at the excellent Stag and Huntsman pub, in Hambleden, as, on this occasion, it is undergoing serious restoration and will be shut until May 2012! I found a blog of the restoration work HERE. I remember one sunny summer Sunday, a few years back now, stumbling across a beer festival, with my friends Paul and Lynn, and it was a real struggle to finish the rest of the walk back to Henley!

With the pub out of action, we settled down on the bench by the church, where I tucked into my flask of chunky soup.

The pretty village is a popular place to visit, despite the pub being shut. The picturesque location has been used for many films, such as Chitty Chitty Bang Bang, Sleepy Hollow, The New Avengers, Band of Brothers, 101 Dalmations. 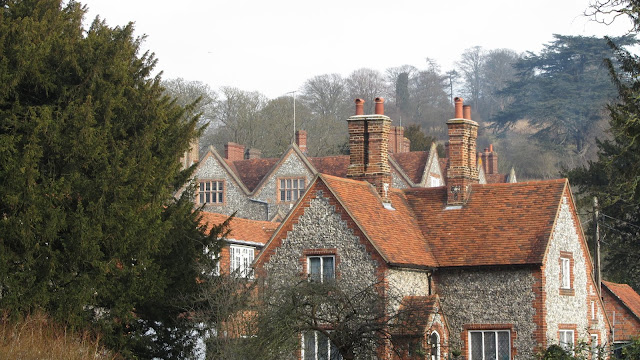 There were the first signs of cloud as we stood up to head north. Walking with others, I notice the pace drops as the breaks are longer when you are in company, so I reckoned that the day was going to be longer than first anticipated; it was time to get a move on.

When we reached the hamlet of Skirmett, today’s exploration of the Chiltern Way was at an end, and we slipped off east, heading for home, 11km away. Rather than feel it was job done, this was the tricky part of the journey. All virgin territory for me, and it proved a test for my navigation skills!

First test came in the wonderfully named Hatchet Wood; a fork in the path, one direction not marked, and I succumbed to a natural instinct to follow a local woman and her dog, striding purposefully, passed us, like they knew where they were going. How were we to know that, a hundred metres later, she would take a short cut through a wire fence? No matter, rather than back track, a spot of off-roading and I soon had us back on the path proper.

Next test was a kilometre away, and Moor Common. I admit I do struggle with woods, and this was no exception, but on this occasion I stopped and had a bit of a think. I’ve learnt too many times that I shouldn’t take a marked path on a map too literally when going through these places. The map showed a straight bearing, the reality was quite different. After some deliberation, we continued on the path and made it to the other side.

I was now keeping a very close eye on the map, we carried on through Moor Wood, where we came across a couple of blokes hunting with hawks. Beautiful birds, I would have taken a photo but the owners didn’t seem too receptive.

A short climb out of the valley, and a stop to finish off the last of the hot chocolate; it was noticeable that the temperature had dropped. Time to get home, but still another 5km.

Soon, we were on a bridleway that ran parallel with the M40 motorway for a time, and was unremarkable until we reached High Heavens Wood. Ascending towards Handy Cross, a track headed off to the right, and a short distance down it, we could see some Nepalese prayer flags. We had to take a look, and we found these Buddhist monuments. 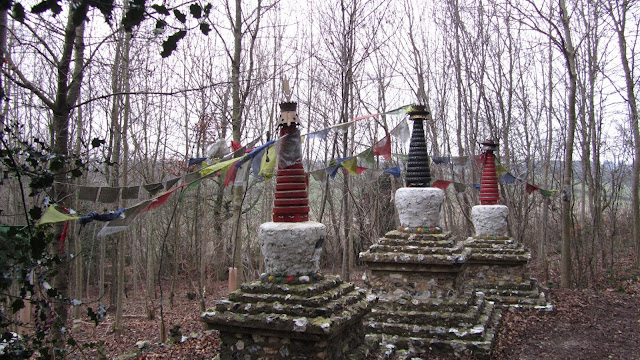 Despite a lot of effort gone to build them here, we could find no information as to why they were tucked away in this wood. I’ve even Googled it, and still can’t find an explanation!

At Old House Farm, we turned south, following a sunken lane, the remains of an old drovers route, no doubt, back to the very first field of the day.

The first flakes of snow started to fall as we reached the car around 4.30pm. We had to wait for Jim to sort out his car alarm; the cold had flattened the battery in his remote key and using it manually had set the alarm off! For a time, I thought I might slope off to the three horseshoes whilst Jim phoned a breakdown service, but it didn’t come to that, stopping as soon as the remote key had warmed up.

So, leg three complete, I am looking forward to the next leg; some of my favourite places in the Chilterns, and ones that remind me of my childhood.