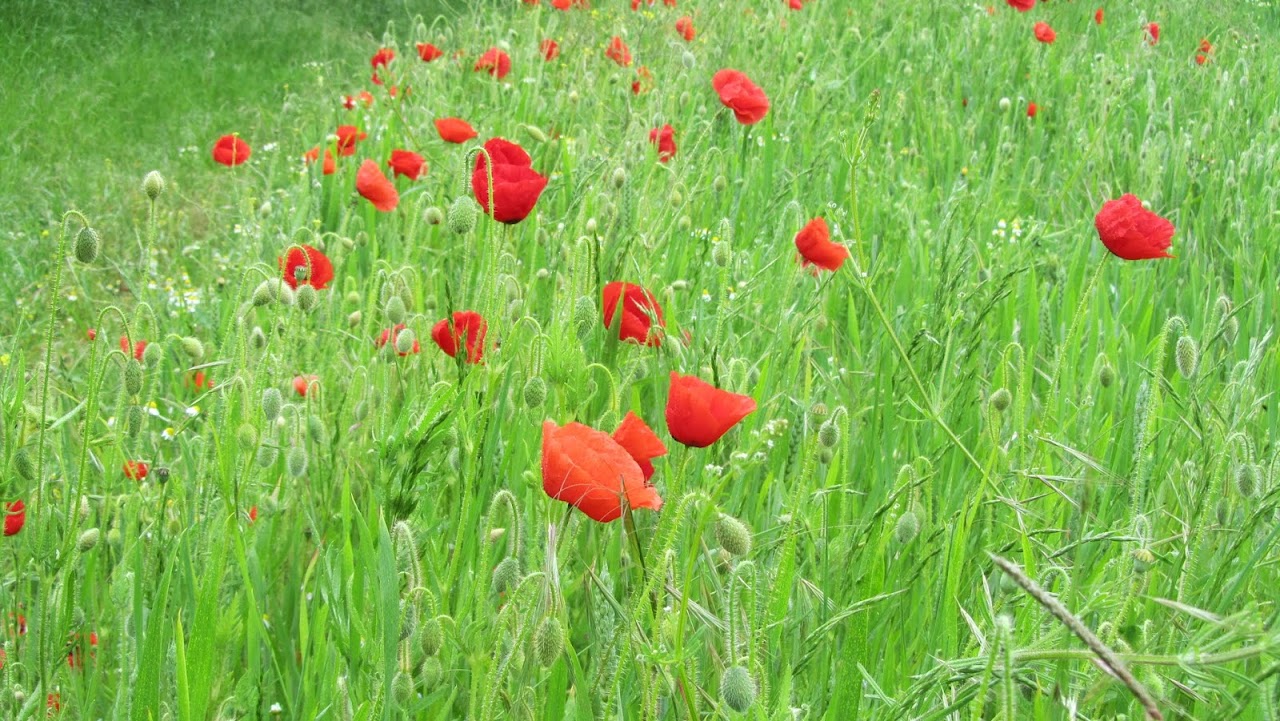 My troublesome shoulder always puts me in a lackadaisical frame of mind, and so when I was awoken by the pain on Friday morning, I quickly bailed on a Jubilee Weekend trip up to the Lake District. The thought of five hours driving never appeals to me, but throw in a constant need to reposition and rest my arm, it wasn’t a difficult decision.


My apathy put me in a real danger of letting the extended bank holiday drift by, and so, before it kicked in, I decided to make an assault on the last legs of the Chiltern Way. I calculated that, with diversions to and from the trail, I still had approximately 115km still to complete, and four days would make a considerable dent, if not complete it.

So, with the best of intentions, I checked all the transport options for the four days.

When my alarm went off at 5:50am, Saturday morning, I was away with the fairies. It wasn’t until half hour later that I realised I was supposed to be catching a bus right that very minute, and my well intentioned plans had already taken a knock! No matter, I grabbed my trusty Galaxy Tab and looked for the next suitable option, which turned out to be a bus an hour later.

I was eventually at Princes Risborough Railway Station and setting off on the walk by 8.30am. It wasn’t the best of days for it, though. 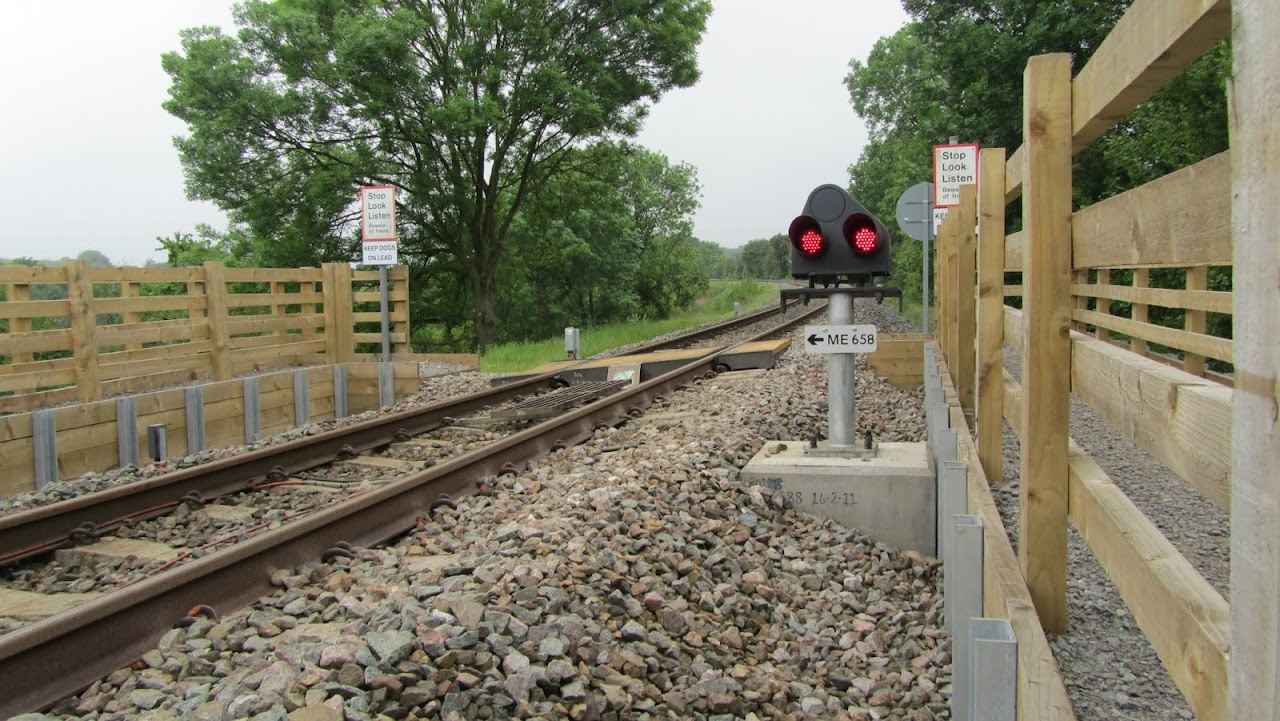 The surrounding countryside was cloaked in mizzle, and it looked to make for a disappointing day. By the time I had reached the Windmill at Loosley Row, it was obvious I was going to get soaked traversing the uncropped fields. The mizzle was also doing a good job  of penetrating my fleece without me noticing, so I changed into full waterproofs before I went any further. 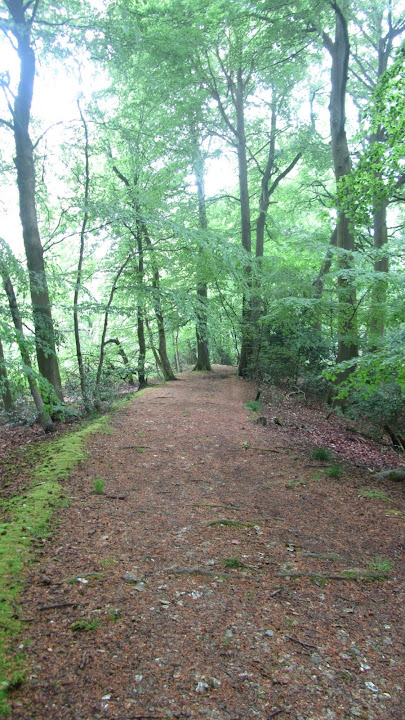 At Parslow’s Hillock, I met up with Grim’s Ditch. A name given to a number of prehistoric banks and ditches, of unknown origin and purpose. They make for interesting routes, no matter where they are.

As I left the ditch, and exited Hillock Wood, I ran into a spot of bother. Before me lay a one kilometre stretch to Hampden House, all of which was through a head height jungle of rapeseed. I could have turned back and skirted the edge of the field using the ancient boundary I had been on, but it would have irked me somewhat to veer from the trail, so I zipped up my waterproofs fully and forged ahead. When I emerged the other side, I was soaked and “petal-dashed” in yellow.

When I reached Hampden House, I stopped to give myself a brush down. Despite my Paramo jacket sodden on the surface, it had done its job and was undamaged, and I was thankful for that. 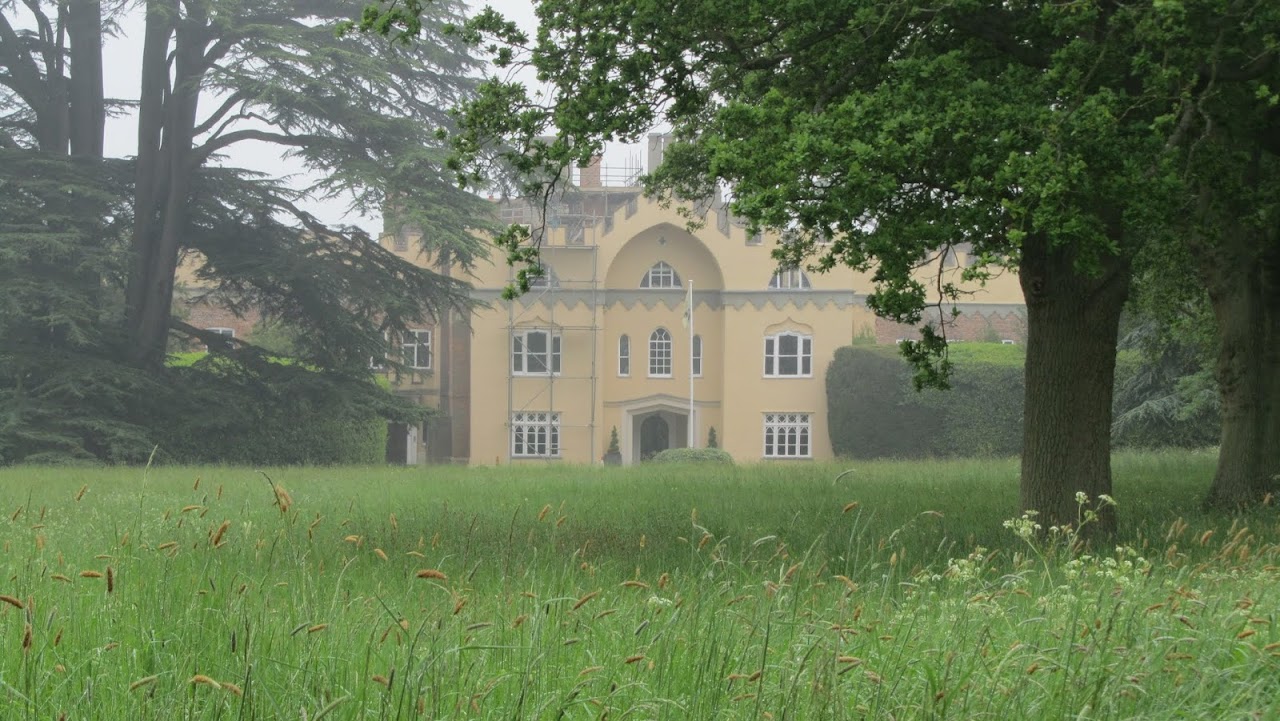 A bite to eat, and I set off again, through the wooded grounds of the Hampden estate, only to hit another bloody rapeseed field on the other side! I vowed this would be the last one I would tackle today, as this journey was supposed to be fun and my boots were now beginning to take on water thanks to the wet vegetation. Mercifully, the flowers of this field were not as matured, and so they tended to stay on the plant, but it was still a miserably wet task. 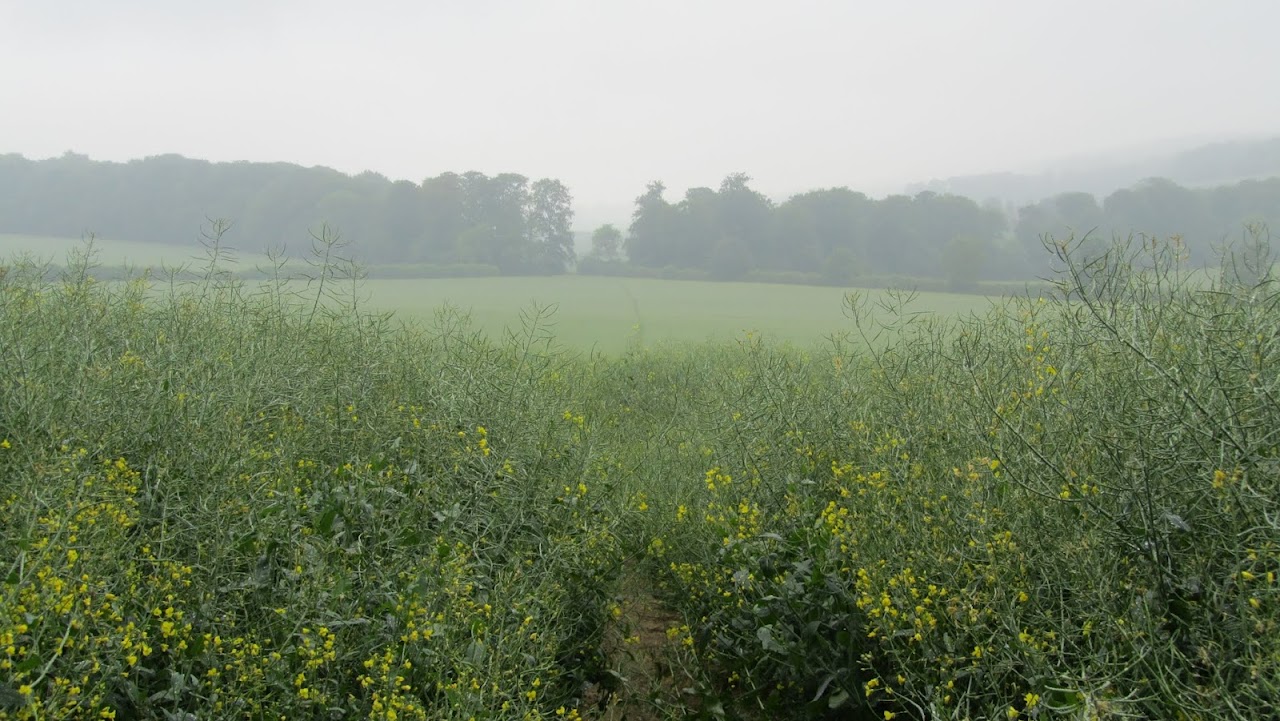 A kilometre further on, I stopped on a bench, looking back to Hampden Bottom Farm, for lunch and another grooming session. After this, I passed through a small copse into the path of my next obstacle; curious cows! 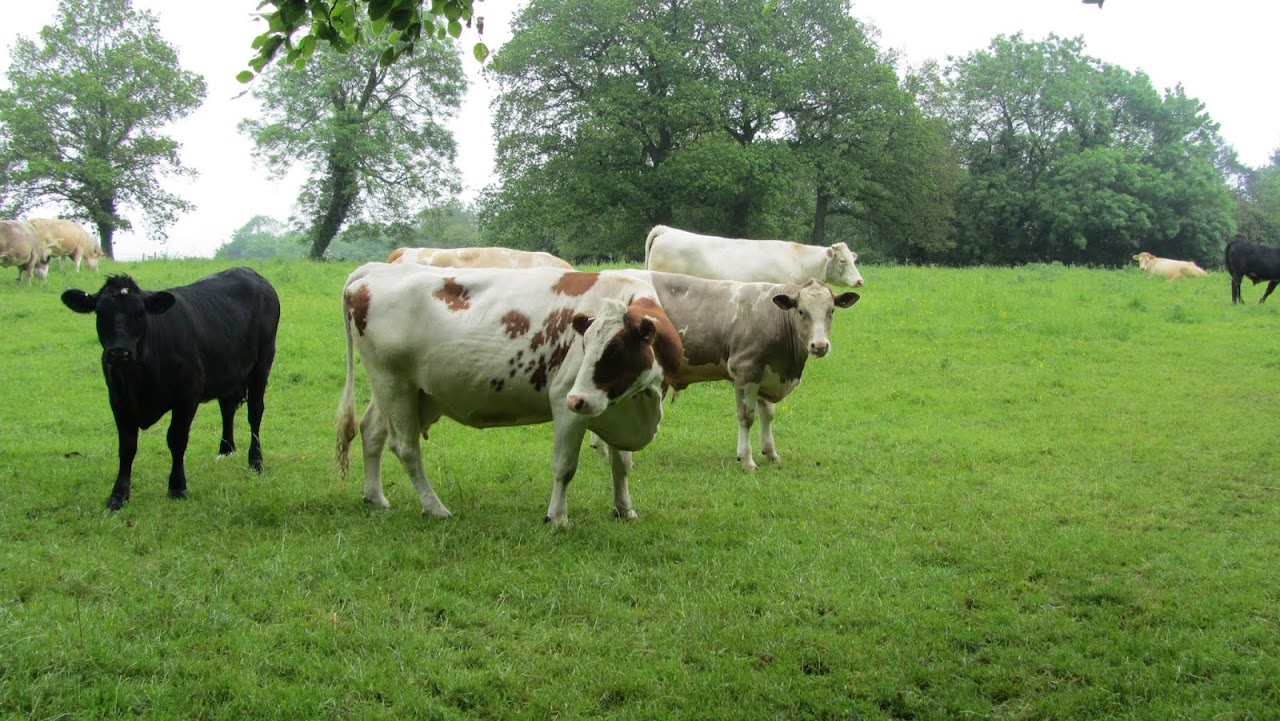 It has always unnerved me how some cows have the tendency to follow you when your back is turned. It is probably a harmless habit they have, but I always have in the back of my mind, a stand off I had on the Two Moors Way, where cattle forced me out of a narrow lane into a field, then decided to prevent me making my way through the field, leaving me with no alternative but to retreat back to the lane, where they blocked me again. When I finally got passed them, back in the field, they started to stalk me, until I eventually chased them off, raising my walking poles in the air. No poles on this occasion, but a couple of turns with my arms raised, and these ones eventually got the message.

Into Little Hampden, where the locals were preparing for their jubilee celebrations, I was now on the South Bucks Way, an old favourite of mine. The routes follow the same path for about a kilometre, parting ways at Cockshoots Wood. 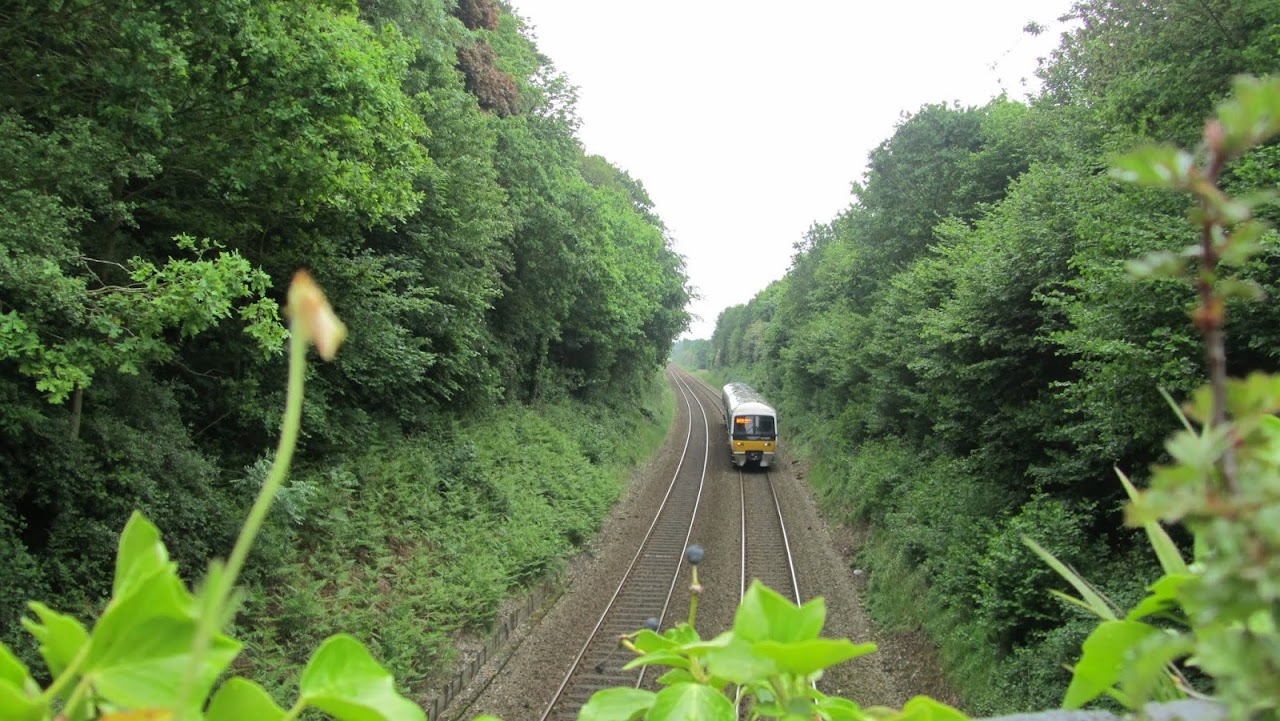 Crossing another railway, this one running between London Marylebone and Birmingham, I passed through the pretty 18th Century Mayortorne Manor in the hamlet of Wendover Dean. 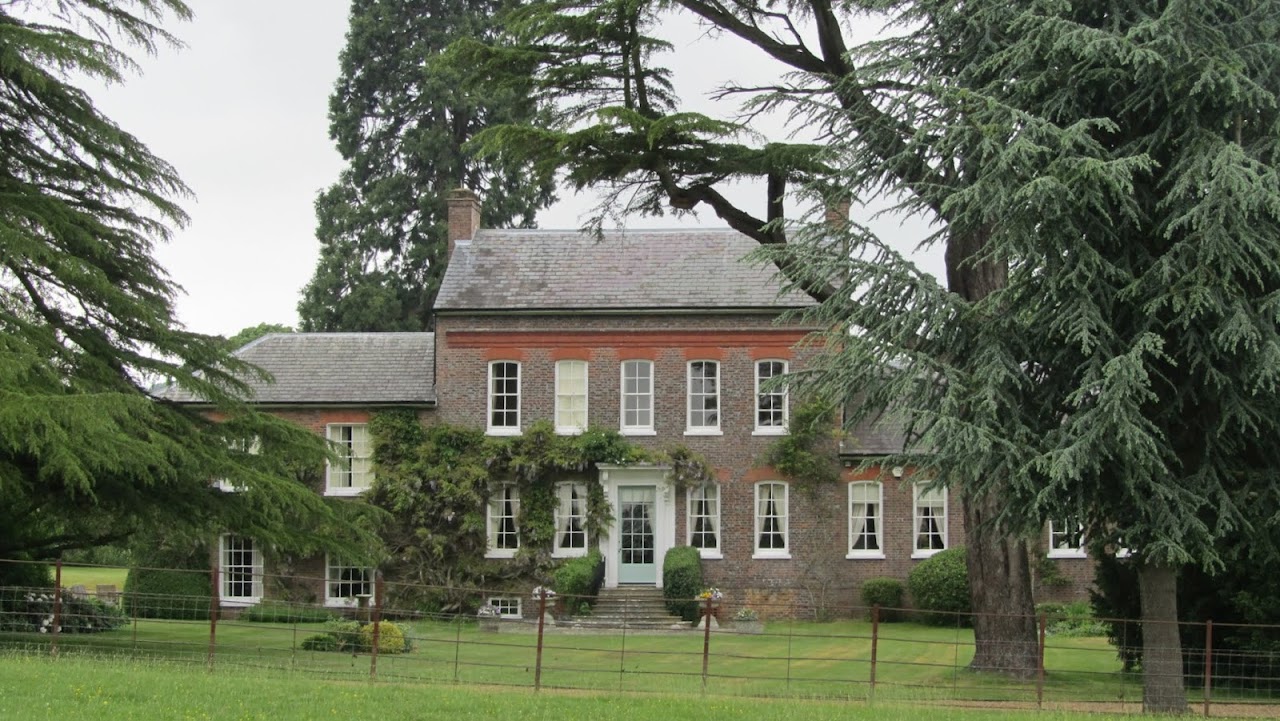 I’m getting good at passing pubs now, the charming Old Swan at Lee Gate, being a perfect example of my willpower! 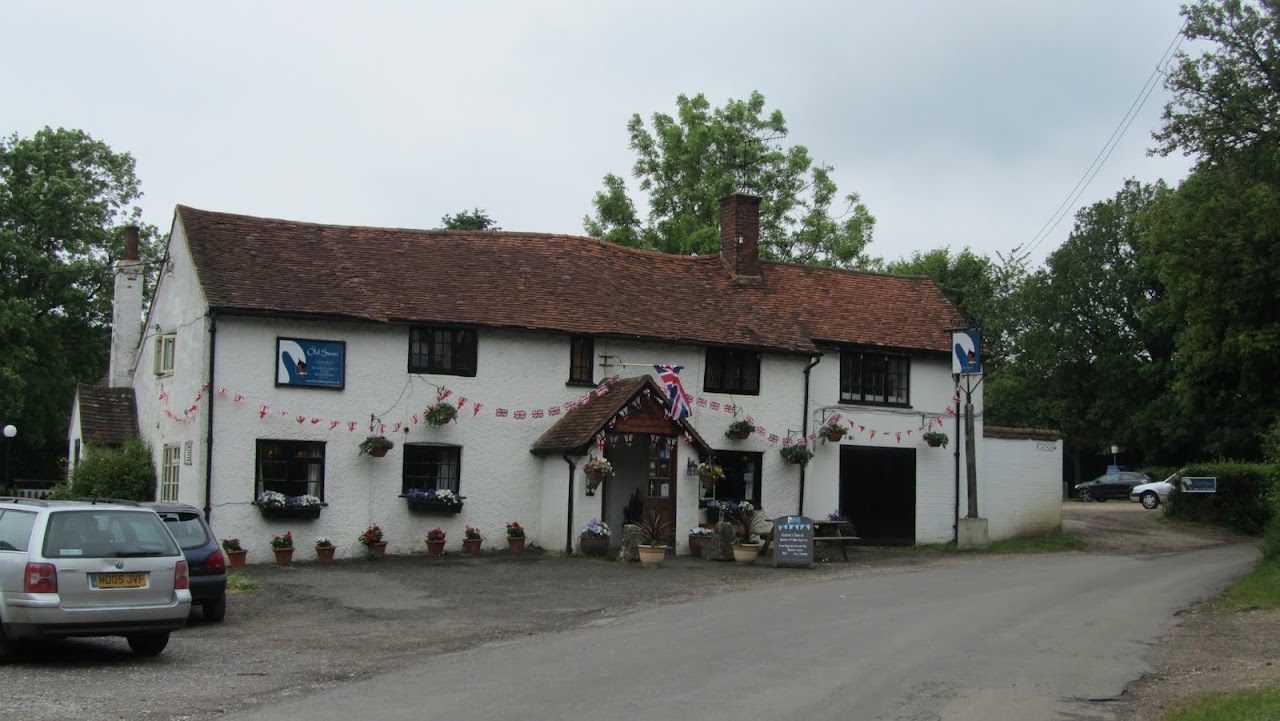 Ten minutes later, I passed a group of D of E’ers, at a junction, scratching their heads and looking quizzically at their maps. I decided that stopping to show them where they were would not be educating them, and instead I said “good afternoon” and strode purposefully passed; a man in the know! I heard one girl declare “I think we should follow that man”; fine if their objective was to walk the well signposted Chiltern Way, but I hoped their navigation task would have been a little more complex. 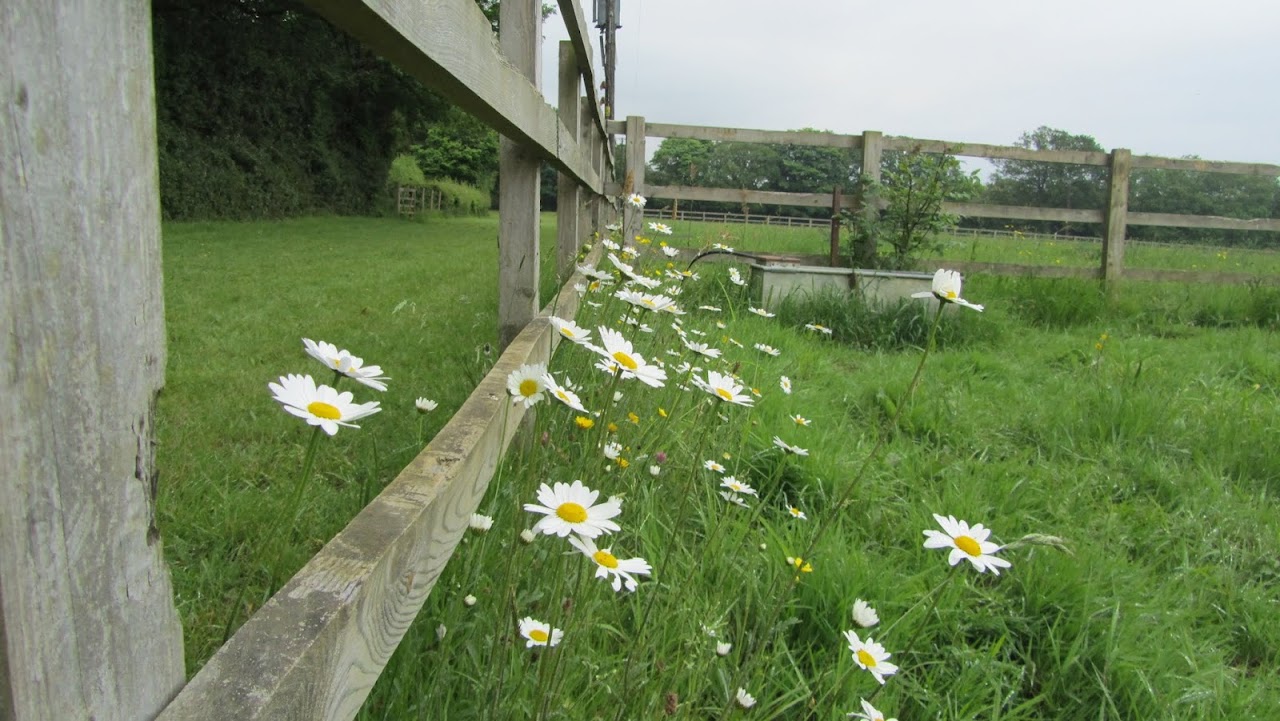 Thirty metres on, I stopped to take a photo of a horse in a field of buttercups. In my efforts to try not to get the unsightly thin ribbon fence in the shot, I failed to notice it was electrified! Thankfully, it was more a static shock across the chest, rather than a high voltage bolt that would hurtle me across the field! If that had happened, the D of E’ers would have lost all respect for my portrayal as a man who knows all the countryside has to offer! 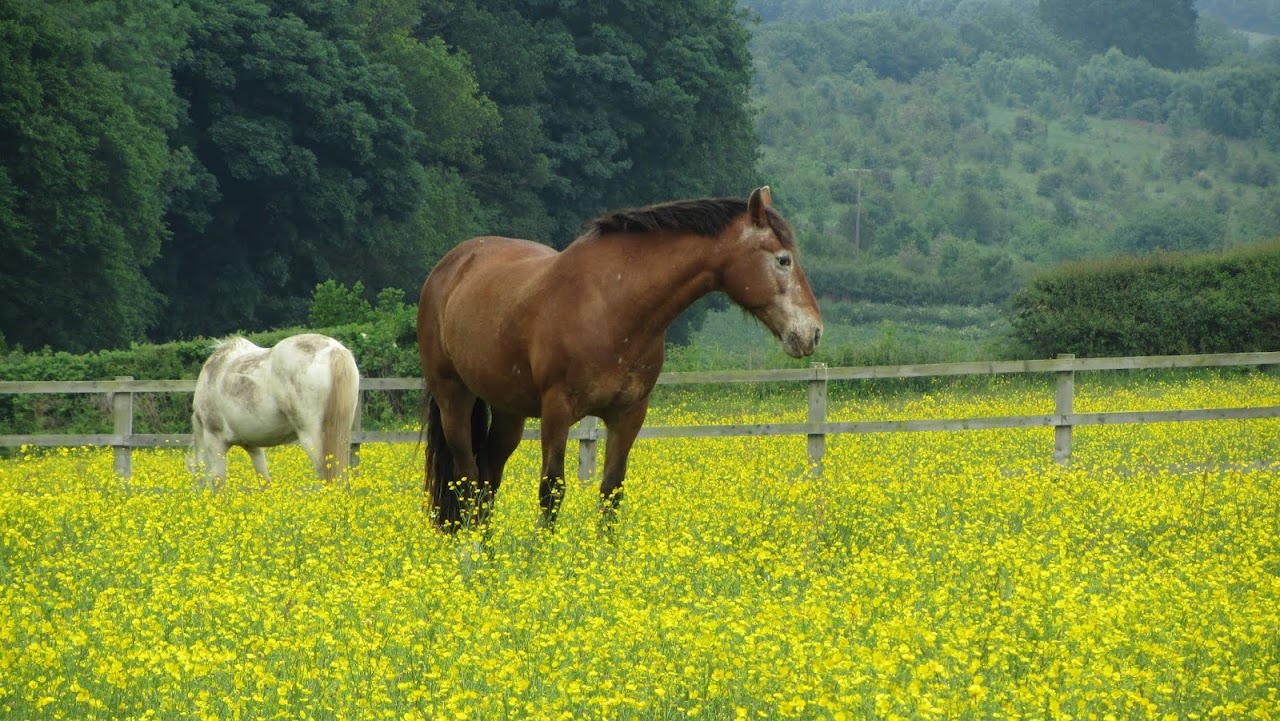 My feet were starting to feel soft and, in my hyperactive mind, developing trench foot! I was keen to finish now, but I still had a couple of hours to go. Fortunately, the going got easier.

Through Buckland Common, and a tempting pub advertising a Jubilee Ale Festival, I pushed on. At Longcroft, I met another section of Grim’s Ditch, one that the way follows for two and a half kilometres, into Wiggington Bottom. 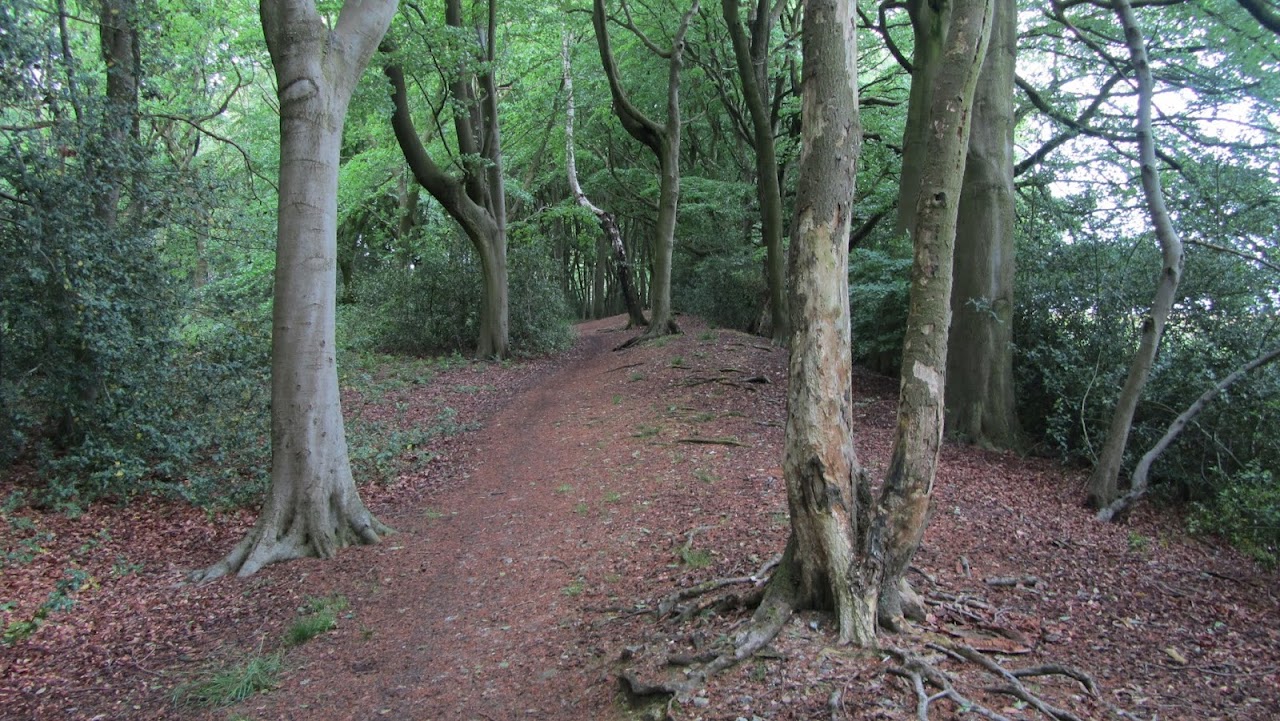 Straight through the village and a descent through fields to the underpass of the A41, and then a quiet lane into the wonderfully named hamlet of Cow Roast, on the Grand Union Canal. This was to be where I would leave the Chiltern Way today, a two kilometre walk up the canal to the railway station at Tring. 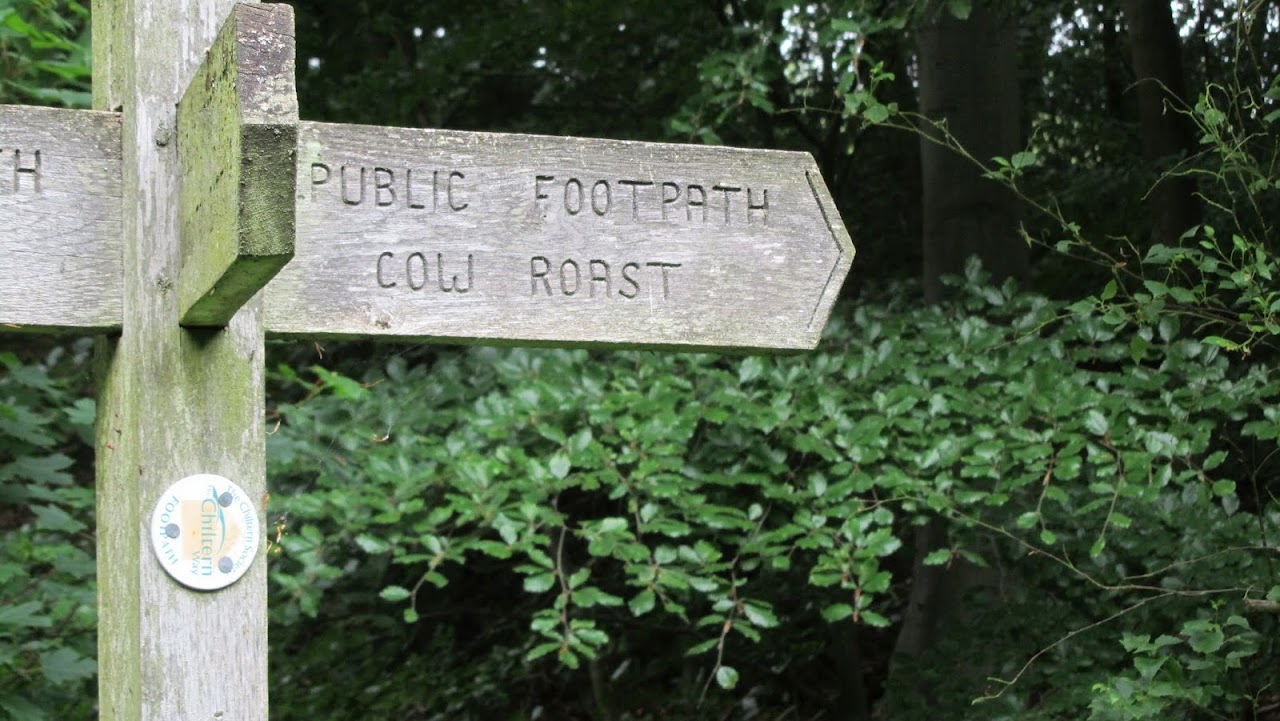 However, opposite the Cow Roast Inn, there was a bus stop, and it happen to have a bus I could take, and it just so happened that it was due in fifteen minutes! Result!
chilterns the chiltern way